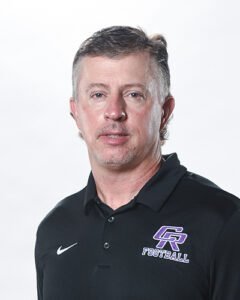 Coach Robinson begins his 25th year of coaching, his 5th year at Cedar Ridge and his fourth year as Campus Coordinator/ Head Football Coach at Cedar Ridge High School. In his 3 seasons as the Raiders head coach, Cedar Ridge is 28-10 overll, 18-4 in district play, and a playoff record of 5-3 reaching the State-Semi Finals in 2017. In 2017 he was named District 13-6A Coach of the Year, Padilla Poll Texas 6A Coach of the Year, and Dave Campbell Texas Football 6A Coach of the Year. Coach Robinson came to Cedar Ridge from Slaton High School where he served as Boys Coordinator/ Head Football Coach. He also has coaching stints at Royse City, Round Rock Stony Point, Levelland, Hereford, and Eastland. He graduated from Angelo State University in 1996. He has been married to his wife Kathy for 16 years and has one son, Baran, who is 15 and an 9th grader at Cedar Ridge High School.